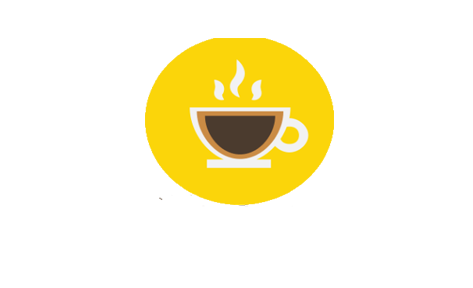 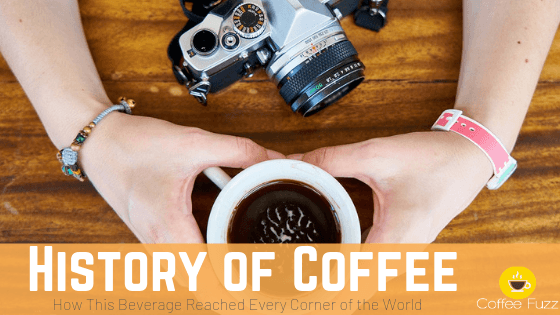 History of Coffee: How This Beverage Reached Every Corner of the World?

What makes a morning better than anything? A cup of coffee!

The history of coffee is as interesting as its freshness.

After the first discovery of its refreshing and healing power, the beverage began to win the heart of people.

Here, we will see how coffee was introduced and emerged within a short period of time in every corner of the globe.

Coffee is a Recent Discovery

If you ask any person what they prefer, tea or coffee, the answer will vary. These two are ruling beverages all over the world.

However, tea was discovered thousands of years ago by the Buddhist monks of India.

The health benefit of Green Tea is well-known though the taste is quite a bit off! And, this is where coffee takes the steering of popularity.

The British took the North-Indian tea to a completely new level. Coffee has a different kind of history.

It comes in a condition where you need to collect beans, roast them, and brew properly.

These did not happen all at once. There is a beautiful story behind discovering the whole process. 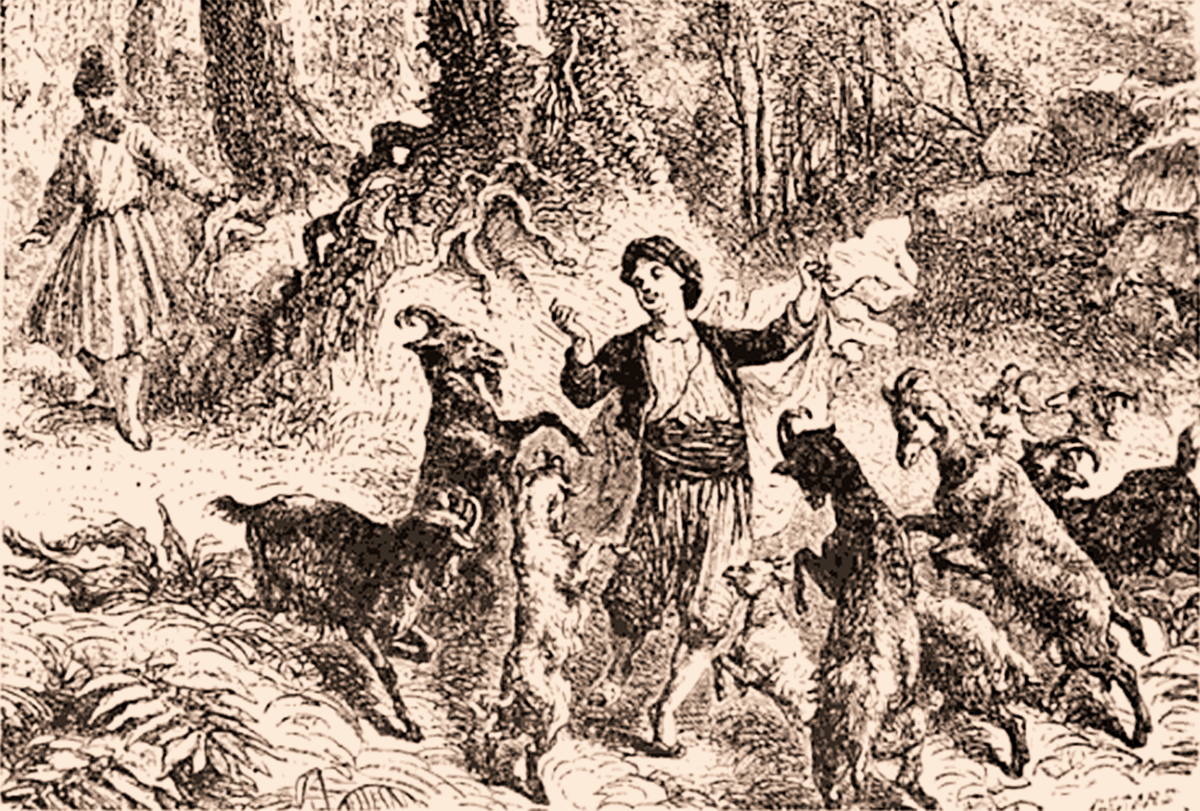 Identifying the exact time period of coffee discovery is impossible. According to a lot of trustworthy references, the discovery of coffee happened around 500 years ago. And, it was done by an Ethiopian goat-herder, named Kaldi.

One day Kaldi was feeding his herd in a field. There he saw some goats were acting abnormally. When he got close and tried to find out the reason, he discovered something interesting. Those goats were eating a special herb seed.

Kaldi took some of the seeds to a nearby Sufi monastery. Hearing the incidences, they throw away the seeds in the fire to destroy. They feared the effect on the goats.

But, the next part is the most interesting one. The sweet and attractive fragrance of the roasted coffee beans mesmerized everyone in the monastery.

They named it “heavenly seed” gifted by God. To make it drinkable, they added the roasted beans in hot water.

This is how the first cup of coffee was prepared. In the upcoming years, coffee became the most popular drink among the people of Kaffa in Ethiopia.

Spreading of Coffee around the World

The actual unroasted coffee beans are way more different than the beans we find in our kitchen. The beans look like cherries.

However, after the discovery of the amazing effects of coffee, the Ethiopian monks started consuming it. During that time, Yemeni traders visited Istanbul quite often.

Some Yemeni traders brought coffee beans in the port of Istanbul and opened a coffee shop.

This is the first coffee shop in the world and it was in Mocha port of Istanbul.

Is the word “mocha” seem familiar? Yes! The Café Mocha or Mochaccino is named after this first shop.

As the port was visited by people from different regions, the spreading of coffee continued. Soon it reached Mecca and became one of the most famous drinks for the Muslim pilgrims during the praying time.

Egypt was considered a place of wisdom and knowledge. When coffee beans enter the Egyptian border, some people found it as an energy beverage. Cairo was the second city after Mecca which embraced coffee quickly.

Actually, you will be wondered about knowing that the reason for its increasing popularity was the aftereffects.

Muslims have to say their prayer for a long time. The Sufis of Mecca discovered that coffee makes it convenient to stay awake and say prayers with more concentration. 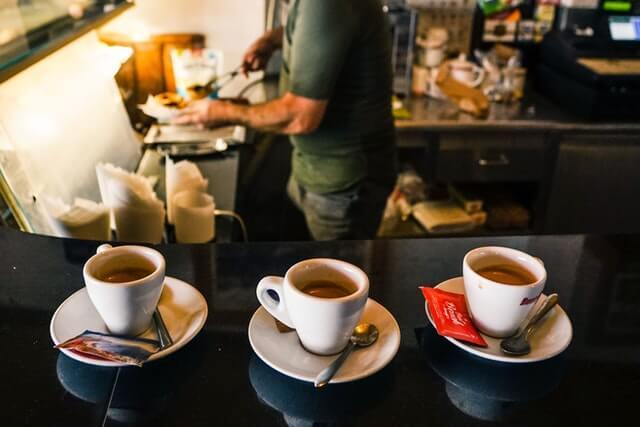 The ancient coffee bars of Mecca and Cairo started gaining popularity. People came to the qahveh khaneh to enjoy this delicious drink. These shops started overwhelming with people.

The arrangement of Belly Dance and Arabian music became an inseparable part of these coffee shops. These were for attracting customers. The idea of pubs emerged from such attractive events and coffee was called the “Wine of Arab”.

Such naming discouraged some religious people from consuming this beverage. They began to spread the word and did not succeed. People of Arab and near East Asia became a fan of coffee.

When Arab and the nearby parts were mesmerized by coffee, Europe was the center of power. This was the most developed region in the world.

European travelers (gypsies) came to visit the Eastern part of Asia. They heard about coffee and tasted it in real.

At the beginning of the seventeenth century, travelers and traders began to take coffee to their relatives in Europe.

This absolutely unknown beverage was welcomed warmly in Europe. But it did not continue because of fear. The aftereffects of coffee were too much to bear for some people. They started calling it “Satan’s Drink”.

The European column of religion was totally handled by the Pope. The controversy about coffee became the talk of the town.

People were afraid of taking this drink. Pope Clement VIII heard about this Satanic Beverage. The future of coffee in Europe depended on how he would react.

The next part is quite interesting. The pope decided to taste it by himself before taking any further decision.

He tasted and found it completely harmless. Religiously he approved the drink through the papal approval.

Unlike an amusement place, coffee houses became the central point in the countries of Europe.

People gathered and talked on topics like politics, economy, trade, etc., in these houses which had already become the communicational centers.

The best part of introducing coffee in Europe is the replacement of alcohol. European people replaced their morning beer glasses with a cup of coffee.

Their energy was at a peak and the productivity increased consequently!

From the journals of the 17th Century, London was occupied by more than 300 coffee houses. Nowadays, the number has increased significantly.

Coffee replaced both alcohol and tea. The production of coffee became a part of the European business. Societies considered this as a sign of national development.

Arabian coffee production was not the only source for consumers.

Every nation of Asia and Europe were busy in finding a better way of coffee production.

The Miracle Entrance of Coffee in America 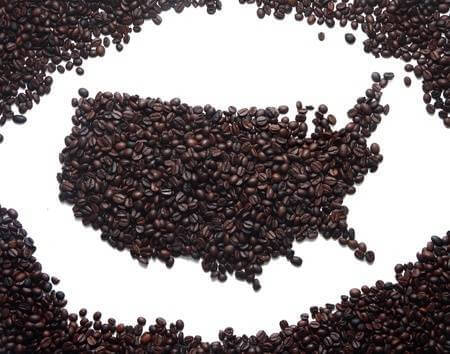 Right now, the citizens of the USA drink the most coffee in the world. But America had to get the first introduction of this beverage through a lot of miraculous events.

The French King Louis XIV received a present of coffee plants in the year 1714 from the Mayor of Amsterdam.

He planted the tree in front of the palace. After nine years, a naval officer carried one seedling from the grown plant to his next voyage. His ship was attacked by pirates and he reached to the Martinique Island of American continent. He sowed the seed.

It got the perfect weather to grow.

The rest is history!

This South American country was also gifted by one of the French elites. The generosity of a French Governor’s wife to Francisco De Mello Palheta played the most important role in it.

Along with a flower bouquet, she gifted a coffee seedling to Mello. He took it in Brazil and the plant grew amazingly.

Nowadays, Brazilian coffee has special fame for its taste. And, it happened because of the above miraculous event.

Where the Journey of Coffee Continues?

The journey does not end here.

The history of coffee is as colorful as its variations. People have discovered making different types of coffee. Espresso, cappuccino, mochaccino, latte, etc., have become famous variants of coffee.

Frappe or iced coffee was first discovered by Greek people in the 20th Century. So, there are more to come in the future.

Importance of Coffee in the World Economy

The proven health benefits of coffee are the actual reason for its importance.

Apart from the taste, the coffee is also a mean of global trade. A lot of national income depends on the production of this beverage and related items.

International trade of the roasted and unroasted beans covers a big portion.

Almost every country either exports or imports coffee beans. And, it started from the port of Istanbul 500 years ago!

A large part of coffee is exported to the USA. The productivity of workers increases and people can contribute more to production.

A lot of firms and companies have made it a mandatory part of their daily habits.

What’s Your Realization from the Journey of Coffee Beans?

Did you wonder knowing how coffee traveled throughout the world? Let us know your thoughts. What health benefits do you get? Will you give it a try to cultivate a coffee plant?

All you need is leaving a comment, suggestion, or opinion. The journey of coffee continues for centuries and it will continue in the future.

Take a sip and realize the discovery of this amazing beverage. Enjoy!

About the Author Timothy

Hi, this is Timothy Cary & welcome to my blog CoffeeFuzz.com. I started this blog to reward the coffee lovers with most useful coffee information’s available in online.